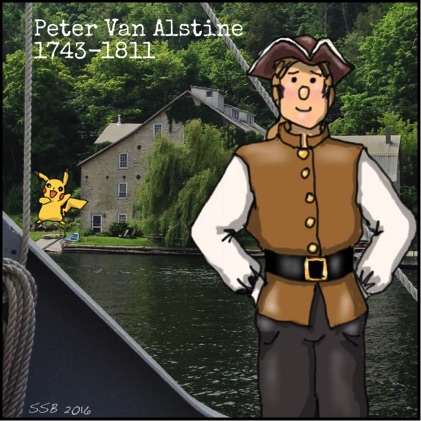 One of the first Loyalists to land on these soils was a man by the name of Peter Van Alstine. I should note that he walked this earth long before photography existed, and I couldn't find any sketches of him from the time, so I have no idea if this cartoon actually captures any of his features! I wanted to include him because of the incredible impact that he, and those who followed him, had on developing and building this area. The history around PEC is just amazing!

Forced to flee his home with a bounty on his head and little more than the clothes on his back, Van Alstine landed here after the American Revolution in 1784. Also, technically – he didn't actually land in The County as we know it today, he stepped off the boat in what was then known as the 4th Town (now Adolphustown) which is just outside of PEC and across the water from Glenora. The land that he stood on (along with many other refugees who either joined him at the time or would soon would follow) was completely uncultivated - they were literally starting from scratch under considerably harsh conditions.

For a period of time, he ran the Glenora Ferry that connected the 4th to the 5th Town (which was the first officially declared area of The County) and built a grist-mill (now the Glenora Fisheries Research Station) as well as the general store on top of the mountain which today houses the Lake-on-the-Mountain Inn restaurant. He also built what is currently known as the Miller House across from the store for the guy who ran his mill! Current owners of the Lake-on-the-Mountain resort recently purchased this building, and now you can enjoy delicious wine/beer and charcuterie platters while staring out at the stunning view!

When you are in The County, I think it's totally worth taking the 10-minute ferry ride over towards Aldolphustown for a few reasons:

The ride is GORGEOUS even if it is short.

The ride is toll free – it's just an extention of the Loyalist Parkway.

While in Aldophustown – you can see the historic spot where he and the first Loyalist settlers landed.

If you have time – take the drive all the way into Kingston (about 45 minutes) as the drive is gorgeous.

When you come back to Glenora (or if you opted not to get on the ferry in the first place!) head up to Lake-on-the-Mountain and stop by either the restaurant or The Miller House. Both original structures are still standing, the view is spectacular and the food is terrific!!

I've barely touched upon Peter Van Alstine's history and contribution to this place. If you want to learn more about the history of PEC – you should pick up a copy of Prince Edward County: An Illustrated History written by Steve Campbell, Janet Davis and Ian Robertson. If you are passionate about the area, this is a great, well-researched and easy read. Also, there is a great series of short videos called History Lives Here Inc. produced by Peter Lockyer – you can watch these vignettes packed with quick bites of historical info!